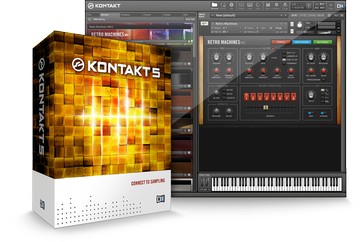 Native Instruments has announced Kontakt 5, the next generation of its leading software sampler.

The comprehensive effect assortment in KONTAKT has been extended with several key additions that focus on studio-style sound processing. The new “Solid G-EQ” and “Solid Bus Comp” algorithms – derived from the upcoming SOLID MIX SERIES – enable studio-grade equalization and compression, while the separately available TRANSIENT DESIGNER has been integrated into the effect arsenal of KONTAKT in its original form.
Additionally, a new analog-modeled Tape Saturator can add natural compression and subtle organic overdrive, while the acclaimed vintage sampling modes from Native Instruments’ groove-production system MASCHINE have been integrated into the feature set of KONTAKT 5 as well to provide additional flavors of charismatic “vintage dirt”.