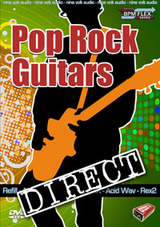 It is a vast resource of six-string sounds that captures the energy and vibe of today’s chart-topping hits. With its radio-ready hooks, head bouncing rhythms and fist-pumping choruses, this collection makes finding the right guitar part a whole lot easier.

From a producer’s perspective, it often takes more than a single guitar track to build a great song. That’s why every song part in Pop Rock Guitars Direct is comprised of multiple complimentary melodies and rhythms designed to lock together. Call-and-response phrases, chiming arpeggios backed by double-tracked power chords, and interweaving riffs all work together to create rhythmic and harmonic depth.

And as part of the BPM Flex Series™, Pop Rock Guitars Direct allows every REX-based loop to be used at a huge range of tempos with no artificial stretching. Need to use an 89 BPM loop with a 132 BPM loop in a track set to 105 BPM: no problem!