Percussa has announced it has integrated a wireless module into every AudioCube, allowing up to 15 wireless AudioCubes to now wirelessly transmit cube detection, distance and colour information in real time. 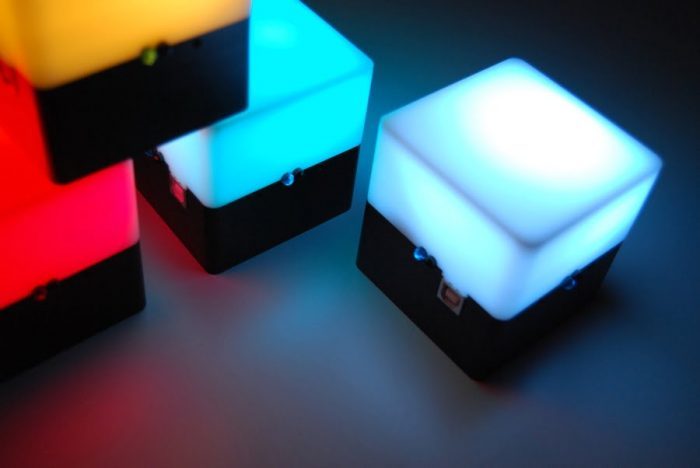 The Percussa AudioCubes that you can buy today are different from the Classic AudioCubes Percussa released in 2007. The current generation of AudioCubes, sold through the Percussa website, all come with a built-in wireless module, powered by a custom wireless protocol.

While the Classic AudioCubes had to be plugged in via USB when using them in certain modes, this is not the case anymore with the current generation of AudioCubes. By integrating a wireless module into every AudioCube, up to 15 wireless AudioCubes can now wirelessly transmit cube detection and distance information in real time to the wireless base station cube which stays connected with a cable (up to 50ft away).

This hardware upgrade gives users freedom to move around while using AudioCubes: they can grab one AudioCube, go to the other side of the studio or stage and control effects in their favorite MIDI DAW or hardware by moving their hands and fingers in front of the sensors of the cube. Or they can use a network of AudioCubes on a table which might be several meters away from the computer, and start and stop sounds, turn effects on or off, modulate parameters or patch software synths, using the detection data from the cubes. Colour feedback to the cubes can be wirelessly transmitted using MIDI CC messages.

Rather than using bluetooth or wifi, Percussa decided to develop its own wireless protocol based on the 2.4 GHz wireless radio band, because the needs of professional musicians are very different from the needs of the wide consumer market, and Percussa’s main goal is to provide great tools for professional artists. For instance when unplugging the wireless AudioCubes network and plugging it back in, the network is immediately fully functional again, without interfering with any audio applications which are running on the computer, which is crucial during live performance situations.

Besides opting for a custom wireless protocol, Percussa also now built its own wireless module which runs the protocol. This allowed Percussa to deliver better signal quality and omnidirectionality.