Pesto Music has announced its Remix Contest 2011, a chance to win prizes from discoDSP

If you follow Pesto Music’s activity, you will surely have noticed a lot of remix business going on. Be it either remixes by other artists for Pesto or Jon Silva remixes for other labels. So far, these remix arrangements were done by personal contact or asking Pestoleros for a favour. You usually do not notice much of the work that’s going on behind the scenes. Today, we’ll make an exception. 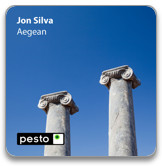 We are happy to announce the first open remix contest on Pesto Music! #prmx

The tune in question is Jon Silva’s “Aegean”, first released back in the summer of 2007 on our very first 2.0 compilation. Now, we’re looking forward to releasing a remastered original along with brand new remixes. Any genre goes, the parts/stems are a free download and on top of that, you can also win a free license for a softsynth.