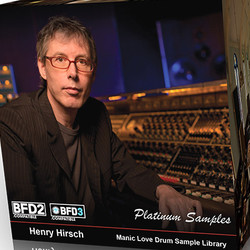 Henry Hirsch is widely credited with being the impetus behind the vintage gear movement in the recording industry that continues today. He began his career in Berlin in the late 70’s as a studio musician and was Lenny Kravitz’s engineer and musical partner for 25 years. In addition to recording Lenny’s hits (It Ain’t Over, Are You Gonna Go My Way, Again, American Woman, Let Love Rule, Always On The Run, Lady, I’ll Be Waiting, …) Henry has also recorded four number one albums in Japan, Vanessa Paradis’ number one album in France and Madonna’s number one single “Justify My Love”. Henry’s credits also include Michael Jackson, Joan Osborne and Mick Jagger.

In 2008 Henry purchased a 19th century church in the Hudson Valley in upstate New York and turned it into his new Waterfront Studios outfitted with his vintage Helios console and Ampex MM1000 tape recorder which were both used to record this sample library.

The samples are formatted for BFD3 and BFD2 and are available at 44.1kHz/24-bit resolution with as many as 187 velocity levels and include Bell, Bow and Edge articulations on all cymbals, as well as rim shots and rim clicks on the toms. The samples include both Room and Plate samples (in BFD Eco only the Plate will be available).

The expansion pack is available for purchase for the introductory price of $89.99 USD (regular $99.99 USD). Requires BFD3, BFD2 or BFD Eco.