PreSonus has introduced the StudioLive AR22 USB, a 22-channel hybrid performance and recording mixer and newest member of the company’s StudioLive AR series.

Lightweight, versatile, and feature-rich, StudioLive AR-series consoles are musician’s mixers, packed with analog connections and digital tools for live performance and studio use. 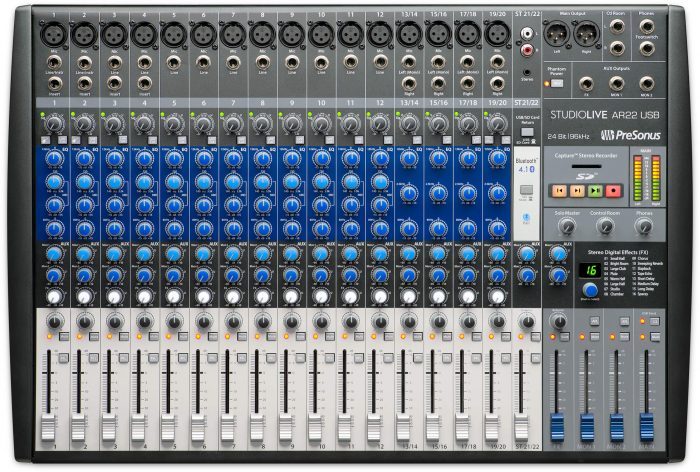 The StudioLive AR22 USB mixer is compact and road-ready, and packed with the connections and features needed to mix and record live, in the studio, and in rehearsal.

A great companion for the recording musician, the StudioLive AR22 USB mixer is equipped with a Mac®- and Windows®-compatible, 24-bit, 96 kHz, USB 2.0 audio interface that can capture all input channels and the main mix.

Need to capture a quick two-track mix for rehearsal and don’t want to use your laptop? No problem: The StudioLive AR22 USB mixer comes equipped with an onboard stereo SD recorder that lets you record the main mix without a computer—just hit Record and go.

You can also use the SD recorder to play up to 32 GB of MP3 and WAV files for hours of program music or backing tracks without needing a computer.

The StudioLive AR22 USB features 16 Class A mic preamps and 26 analog line inputs. In addition to a 60 mm fader, each of the 12 mono channels and 4 stereo channels gives you a low-cut filter, mute, pan, and solo with prefader listen. Phantom power can be enabled globally for use with condenser microphones.

The StudioLive AR22 USB mixer comes with the PreSonus Super Channel, allowing you to play audio from four stereo sources simultaneously. You can pair your phone to the mixer with onboard Bluetooth 4.1 and instantly have wireless access to your music library.