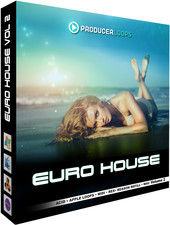 ‘Euro House Vol 2’ is the second in a brand new series from Producer Loops, bringing you FIVE incredible Construction Kits inspired by the freshest House sounds to conquer clubs across Europe. With both commercial and underground appeal, as well as a professional feature set, this is a must-have sample library for any serious House producer.

Euro House Vol 2 is available to purchase in various formats, starting at £24.95 GBP.