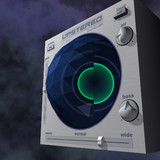 These stages create an overall loudness effect on the final output, so a gain control is included to keep the limits in check.