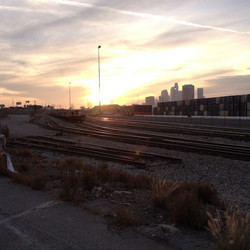 REA015 LA Underground is all about grit and the unseen. Charles describes his recent infatuation with the underbelly of Los Angeles:

“I found myself interested in recording ambiences in really seedy/unsafe places downtown that made me think of some of my favorite LA crime dramas namely, Billy Friedkin’s “Too Live and Die in LA”, and Michael Mann’s films, “Heat” and “Collateral”. I found the locations for all those films to be an incredible juxtaposition of the common sunny depiction of Los Angeles which draws so many tourists… well, those tourists probably don’t go to these places….”

The sample library (73 stereo files, 24-bit/96kHz, 9.6 GB content) is available to purchase for $65 USD. Purchase before January 31st to receive an additional 700+ MB of sounds from Charles’ recent recording trip to San Francisco.