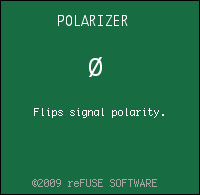 reFuse Software has released Polarizer, a free plug-in which allows you to flip the signal polarity in your DAW.

Polarizer is available as a freeware Pluggo plug-in for Mac.