D16 Group has just released an update of Phoscyon, a virtual bass line synthesizer plug-in for Windows and Mac.

Phoscyon is an emulation of Roland’s classic TB-303, the squelchy bass synth from the early 80’s. Originally designed as a bass companion for practicing guitarists, this little monophonic synthesizer would play a big role in the development of various genres of house music a few years later. Almost three decades after it was introduced, the TB-303 is now one of the most sought after vintage synths. 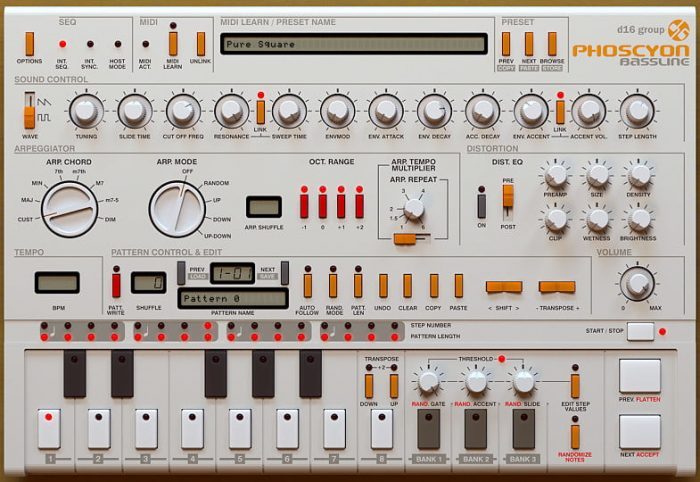 The interface shows that Phoscyon offers quite a number of additional features to the original TB-303.

In the top of the screen you can set the sequencer mode to either internal or external (when internal LED is off). When using the internal sequencer it can be synced to the internal clock —30-300 bpm, or to your host tempo. Phoscyon has 96 patterns which can be triggered by MIDI notes in Host mode; great for performing live. With the new MIDI learn system it’s dead simple to link Phoscyon’s parameters to your external controller. Click the MIDI learn button, adjust a control on Phoscyon and on your controller and voila, all done. You can save your custom MIDI CC maps as well.

Moving on to the next section we find the presets section. Presets store information about the sound, arpeggiator, distortion, and volume parameters. Phoscyon can store up to 128 presets per bank, which you can of course save and load. The built-in preset manager can store presets in groups, a handy little feature to assist you in finding the sound you’re after with ease.

Phoscyon’s sound is generated by 2 oscillators with authentically emulated saw and square waveforms. D16 has even emulated some oscillator tuning modes. The default accurate mode has linear tuning across the scale, but if you set it to vintage or low battery mode you’ll get de-linearized tuning for some vintage detuned sound.

In the video below I will run through a few presets so you can get an idea of the sounds of Phoscyon and the various synthesis controls are tweaked to demonstrate how they affect the sound.

Something that the original TB-303 doesn’t have it an arpeggiator. The arp section on Phoscyon features two large knobs:

Four buttons are available to set the octaves which are used for the notes, from -1 to +2. A shuffle parameter sets the swing/syncopation from 0 to 100, to add some groove to your arp notes. Furthermore there’s a knob for setting the tempo multiplier and arp repeat, which both do exactly what you would expect; one multiplies the arp tempo so it plays more notes per step, and the repeat defines how many times a note is allowed to repeat before moving on to the next note in the arp chord/mode sequence.

If you have never seen a real TB-303 you might be surprised it originally does not come with a distortion effect. This type of effect is often used in combination with the 303 so it’s great to have one included with Phoscyon. Some 20+ presets in the Phoscyon distortion presets group do a good job in showcasing the variety of sounds you can get with this effect.

The distortion was designed to be an equivalent to a transistor amplifier with equalization. It features a preamp, diode clipper and three filters (HP, BP and LP).

On the GUI the following controls are available:

As I mentioned earlier Phoscyon can be sequenced in your external host as well as with the internal pattern based sequencer. The bottom half of the interface is dedicated to manipulation of your sequences.

This section might be slightly confusing at first. When not in edit (pattern write) mode, most of the controls will not be active. In internal mode you can select one of the 24 existing patterns by clicking one of the 8 white note buttons in combination with a bank number (note: when using your host you can use MIDI notes to trigger all 96 patterns). Ctrl-clicking the notes chains patterns so one will play after the other. The currently selected pattern will always show in the little pattern name and number displays, but you can’t actually use the previous/next buttons to browse through patterns.

Besides the pattern (bank) load and save buttons the only other controls available are the gate, accent, and slide knobs located above the bank selection buttons.

Editing patterns is not very difficult but if you are new to it the manual will be helpful. In write mode you simply set the note, gate, accent, and slide for each of the 16 steps, which are selectable from the little red diodes in the step number bar, or by clicking the large previous/next button in the bottom right of the interface.

Most of the controls do what you would expect them to do so I won’t go into details of the clear, copy/paste, shift etc. buttons. The randomize function is more interesting.

It will be hard coming up with a bassline sequence that hasn’t been done before, but “randomize” is great for some instant action. In this mode you can specify the parameters that should be included in the randomize process (gate, accent, slide, and note) and the arp chord knob is available to generate notes from the selected chord only. Randomized patterns are stored on the fly so you can generate a bunch of them and navigate back and forth between them.

There is more to the pattern editor and the randomizer (like including custom notes, flatten function, transpose, shuffle/swing…) but I think at this point you should probably just check out the demo version if you are interested to know more about Phoscyon.

Whether or not you like the sounds of the TB-303, it is probably one of the most popular instruments in electronic music. Browsing through the sounds of Phoscyon reminds me of tunes by Aphex Twin, FSOL, Squarepusher, Chemical Brothers, Acid Junkies, Josh Wink, and many more. Perhaps overused at times, the 303 still has a timeless sound to me.

Once you get familiar with the internal sequencer it is a joy to work with. Options like osc detuning, mouse wheel support for knob controls, and comprehensive randomize features show attention to detail. Version 1.8 also has an improved square wave sound and envelope (more expressive). Phoscyon also has permanently active MIDI output, which means you can use its internal sequencer to trigger external hardware/software.

I don’t really know how Phoscyon compares to other emulations like then Muon Tau, AudioRealism ABL2, or the Silver Box by Spectralhead Audio but I think Phoscyon is a superb instrument. To my ears it sounds very similar to a real TB-303, and with the additional arpeggiator and distortion units it goes well beyond the type of sounds that the original hardware is capable of.

If you have experience with Phoscyon or one of the other emulations I would love to hear what you think!