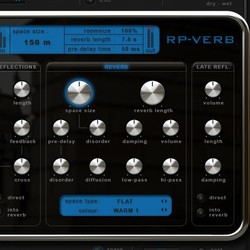 Rob Papen has announced RP-Verb, a reverb effect plug-in for Windows and Mac.

As a young synth player, Rob became obsessed with rooms and reverbs. Together with Jon Ayres, Rob Papen has dived into codes and searched for new directions.. new algorithms. After long testing and tweaking, the result is an unique sounding reverb plugin, the reverb you have been waiting for for year to have available in your setup.

The “main focus” of the RP-VERB plug is its sound. So the controls are “exactly” the ones you need!
Easy to use “space types” are included, each of them have their own character. Long tail reverbs… or unheard of rooms are possible. Just like the RP synthesizers….it is purely made for audio quality, performance and making music. Mix with RP-Verb and you will discover its amazing sound.