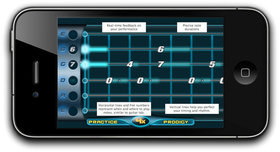 The Way of H has announced that Rock Prodigy was named a winner in the “Education” category at the 2011 Appy Awards. Taking place during the two-day OMMA Global Conference & Expo, the annual Appy Awards honor the best mobile, social and web apps in a diverse range of categories.

Produced by the Way of H, Rock Prodigy uses polyphonic pitch-recognition and allows guitarists from every level to play alongside rock legends with the help of an Apple® iPhone®, iPad® or iPod® Touch.

“This award is a testament to how Rock Prodigy is changing music education and the way people learn how to play guitar,” said Harold Lee, co-founder and CEO of The Way of H, Inc. “It’s an honor to be recognized as a leader and innovator in the world of mobile technology literally weeks into the launch of our app.”

Rock Prodigy is available for free in the iTunes App Store, with premium feature packs starting at $9.99 USD.