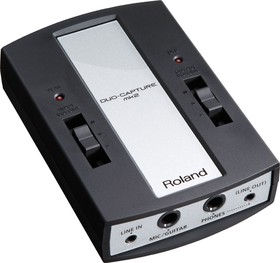 Roland has introduced the DUO-CAPTURE mk2 USB audio interface, an updated version of the popular DUO-CAPTURE.

Offering the same great features as its predecessor, the DUO-CAPTURE mk2 can now be used as an audio interface for the Apple iPad in addition to Windows and Mac computers.

Compact and portable, the DUO-CAPTURE mk2 is a bus-powered USB audio interface designed for musicians and engineers that record on the go with a laptop computer or iPad. It features a 1/4-inch Mic/Guitar input with an impedance selector, plus an 1/8-inch input for connecting stereo devices.