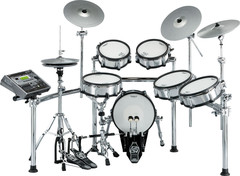 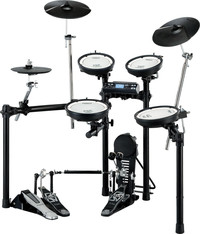 The TD-4K is Roland’s most affordable all mesh head V-Drums kit to date.

Based on the popular TD-4K kit, the new TD-4KX takes the best of the past — outstanding feel, versatility, and affordability — and spices it up with newly developed 6.5-inch mesh pads for high toms.

The TD-20KX and TD-4KX are scheduled for release in September 2009.

So, what would be good for me?
I’m beginning to play but i want the most realistic play for de minimum amount.
What do you recommend me?

Roland is not “the best.” Roland has never been the best, and never will be the best. Like everything else Roland makes, the TD20 samples are rather poor, drenched in reverb and lacking definition and snap, especially on the snares.

Just because something is the most expensive does not make it “the best.” Take guitars for example, the Les Paul is the most expensive, but very far from the best. They should call it the LESS Paul because its design hasn’t changed in 50 years and it lacks all the modern innovations most guitars, even cheap ones, have today. Another example of the most expensive being a poor product is Harley-Davidson, which any jap 500cc bike can run circles around, and out perform in every single way imaginable.

Some people only want to brag about how much they spend on something, and not on the actual features, quality and performance. You’re interested in the egotism of owning the latest thing, and bragging to your friends and not doing a cold hard rational assessment of the product, because doing so would only depress you. That last 5% you speak about is not discernible to you in any way other than the price tag. Maybe you can hook the TD20 up with Monster cables, seeing that they’re super expensive too but no better than coat hangers. http://consumerist.com/362926/do-coat-hangers-sound-as-good-monster-cables

If a company makes a better mousetrap then I’ll be the first to get in line to buy one, but if a company only sells the same old junk in a new case, a new paint job and lots of marketing hype, then I’ll pass because I hate being taken for a sucker.

One last thing: even though I wouldn’t buy a Gibson LP or a Harley, I have to admit they do have a certain mystique associated with the brand, but Roland is not in their league and has no mystique about it because they have no fanatical fanboys like the hell’s angels endorsing their products (LOL). They are merely trying to bully their way in by price alone, and that’s just not enough. You can see the way Roland operates in the direction they’ve taken Cakewalk since they bought controlling share of it: Sonar is turning into a bloated pig and becoming as buggy and unstable as Cubase. I had to uninstall Sonar v8.5 because of all the bugs and go back to v8.31 which itself has tons of bugs as well, just not show stoppers like v8.5. Roland just wants to get a share of Avid/Digidesign’s market and sell by hype and not by product quality.

yes, the set is WAY over priced! but on the other side of that, for at least the module itself, its definitly the best on the market. I own the td20 module w/hart mesh pads. blows away every other brain Ive ever tried and I tride them all. Its the same with all studio gear! Nuemann, A.K.G., Toft audio, SSL, all of it. for that xtra 5% nicer your gonna pay more than tripple. Is it worth it? tell it to the people who rent the studio.[I have a recording studio in Humboldt]They look in the mags, {sweetwater, musicians friend, etc…} and base their opinion on what is the best on what cost the most. In blind shoutouts the A.R.T. preamps and MXL mics {moderately priced} hold thier own against UA and Nuemann{expensive}. But without the blindfold, they choose the expensive stuff EVERYTIME! . Its all a matter of taste. Anyway, I know I paid to much for the TD 20 but thats how much it cost and I had to have “the best”

Roland is out of their freakin’ minds. $8K would buy an absolutely primo real drumkit, mesh heads for it, drum triggers, and a MIDI sound / interface module (I have an Alesis DM Pro) and still have thousands left over. Plus, after you’re done, you can actually play your kit for more than 10 minutes without pain shooting thru your hands like the way it does with the Roland stuff. The bounce is really awkward and unnatural of these Roland drums and it throws my timing off, as does the lack of rigidity in the frame (which also makes it easy to destroy this kit if you use even moderate power).

This is really a tax on stupidity, like for people who can’t build their own PC end up paying 2X+ because they can’t install some RAM onto a motherboard and mount it in a case.

I swear if it wasn’t for the stupid and incompetent people in the world, all these huge corporations would go out of business in about one day because all their products are designed for and marketed to twits.