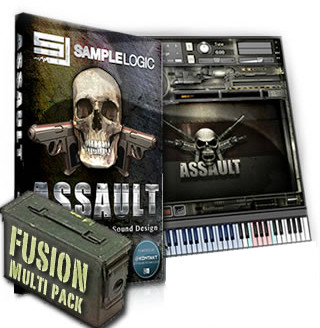 Sample Logic has announced the release of the FUSION Multi Pack for its ASSAULT hybrid transitions and sound design library for Kontakt.

FUSION Multi Pack is a set of over 50 lethal multis that expand ASSAULT to the next level.

The FUSION Multi Pack has been developed and engineered to push the envelop of music and sound design and loaded with the key sounds of ASSAULT. From wobbled out arpeggiated rhythms to bone-crushing big hits and atmospheres.

The FUSION Multi pack is a great addition for film, TV, game composers, and sound designers who want an industrial strength cutting edge to their sound.