Slashdot has launched Firehose, a collaborative system designed to allow users to assist Slashdot editors in the story selection process.

The hose contains submissions, RSS Feeds, journals and Slashdot stories, each color-coded along the color spectrum to indicate popularity. Red is hot, violet is not. 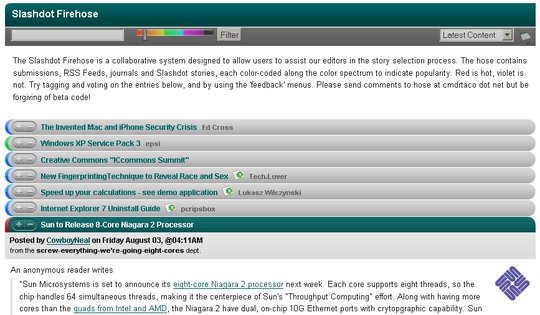 This seems pretty similar to the way Digg lets you digg or bury a story, except with Firehose you get a nice interface to select which stories you want to see by using the Firehose’s color filter.

Most likely, this will be seen simply as a Digg/Reddit clone. What Slashdot needs to understand is that the power of social news sites comes directly from how much traffic they drive: if a site drives traffic, bloggers will inevitably add favicons so readers remember to bookmark articles.

I don’t frequent Slashdot anymore, but when I used to a few years ago, the stories on Slashdot were on a much higher tech/geek level than Digg’s tech section ever was. Sure, Digg has a Technology and Science section, but a lot of these stories seem to have more entertainment value than anything else.

To illustrate, when I just opened the science section on Digg I get the following three stories:

Not quite to same to me…

Sample rate, and the myth of accuracy