Sonic Charge has announced the release of beatrick for Permut8, a free firmware update that turns the effect plugin into a beat mangler.

One of the worst kept secrets about Permut8 is that it supports “firmware replacements”. In case you have not heard about it before, a “Permut8 firmware” is a piece of code that can be loaded into Permut8 to extend or replace its signal processing algorithms. This is not in native code but a portable assembler format for a virtual machine that I have designed for fast and safe (sandboxed) execution.

We have now decided to take advantage of this feature to offer you a (slightly late) Christmas gift. We hereby present the first official alternative firmware for Permut8: “beatrick”. 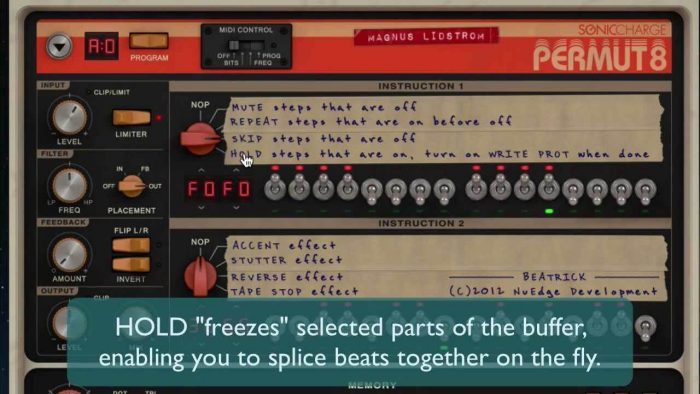 The “beatrick” firmware is available to download for registered users.

Also, if you have not found them yet there are other firmwares already included in the original Permut8 installation, most notably a full port of SAM (the original speech synthesizer from the early 80’s). You need to logon to the terminal in the “about box” to use these. This topic contains more info.

Sonic Charge has also announced the release of Microtonic 3.1 beta, the first 64-bit compatible version. It is a closed beta, but serious beta testers can apply at http://beta.soniccharge.com