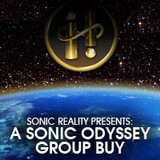 It’s 2010, the year we make sounds for Kontakt! Launching over 30 new downloadable Infinite Player sound sets into orbit, Sonic Reality is celebrating with one MASSIVE Group Buy this Summer!

For only $99 you get the new “Infinite Foundation” library with over 2 gigabytes of top quality sounds from the range of the Sonic Reality libraries for Kontakt / Infinite Player including a deluxe grand piano and acoustic guitar, a Drum Masters 2 multitrack drum kit and groove set, a stereo “STm” Signature drum kit, sound effects from FX Tron, scoring effects from Cinema Sessions and a sampling of stereo artist grooves!

On top of the “Infinite Foundation” library in the Sonic Odyssey Group Buy, you can also choose 5 items (individual libraries or Infinite Player* itself if you don’t have it) from the following list of over 30 products. If 250 people join the Group Buy, then you’ll be able to pick out a 6th title from the list. So be sure to spread the word!