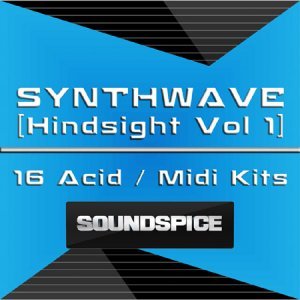 SoundSpice has announced the release of its latest sample pack: Synthwave – Hindsight Vol 1.

Synthwave Hindsight picks up where the sequencers of the 1980s and 1990s left off. Heavily influenced by film and television music, these kits cover a lot of familiar but new ground.

Borrowing from industrial and dub music as well as showing some ‘world music’ influence, each Volume of Hindsight is a soundtrack unto itself. Old meets new and the years begin to blur in a haze of synths and drum machines.

Each of the 16 kits contains 24bit Acidized .wav and midi files as well as alternate renders for maximum customizing, so dig right in and mix and match at will – every kit is the same bpm. Each Volume of the Hindsight series also contains a bonus/remix folder with even more alternate takes, and a ton of chopped and effected beats to use with these kits or to combine with your own tracks.

The midi files will let you pop in your favorite sounds, to really redecorate the room. Between all of the alternate & remix material and the midi files, you will be set for quite a while with this collection of over 800megs of Acidized .wav loops & midi files.

Synthwave Hindsight Vol 1 is available at an introductory 20% discount for one week.