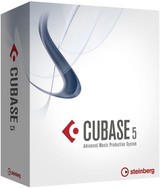 Steinberg has released version 5.5.2 of Cubase and Cubase Studio, the digital audio workstation software for Windows and Mac.

Featuring over 20 bug fixes and enhancements, this update addresses problems involving the VST Bridge, VariAudio and the MediaBay among others. This update went through Steinberg’s entire quality assurance process, therefore we recommend this update when running Cubase 5 or Cubase Studio 5.

Whether you are a hobby musician or a full-time professional relying heavily on Cubase, Steinberg is committed to presenting you with the best product and service.

The update is available as a free download for all registered customers of Cubase 5 and Cubase Studio 5.