Sub51 has announced the release of EBow Elements, a sample library for Native Instruments Kontakt and Komplete Kontrol. 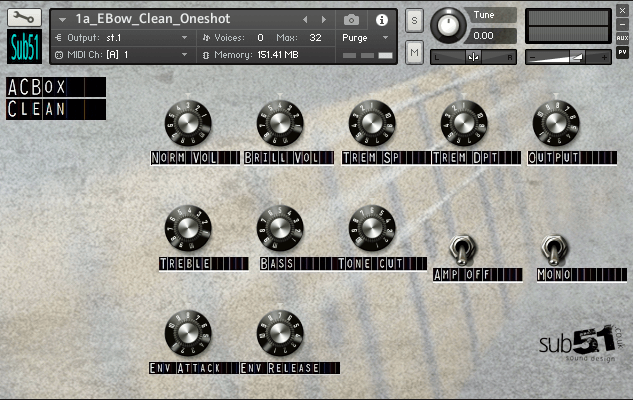 The library features the sounds of the eBow, a hand held electronic bow used to create long sustained notes on a guitar.

EBow Elements is formatted for Kontakt 5.8.1 and all the samples in this instrument were created by using an EBow to achieve as consistent tonality as possible, which allows for the creation of chordal pads (something an eBow performance can’t do in real life without overdubs) as well as solo lead lines. EBow Elements is structured into 3 separate categories Clean, Effects Rack and FX instruments and where possible, each folder contains a tempo-synced one-shot and looped version of each instrument.

To enhance user experience, amp simulation, envelope attack and envelope release have been included with each EBow instrument, which can be either on or off. Instruments included in the “Effects_Rack” category give the option to select from a choice of 11 different cabinet types.

For users of Komplete Kontrol, there is also the option to install and control EBow Elements via pre-mapped and tagged files.

The sample library is available for £13.50 GBP.