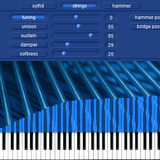 Syflex has released Sylfid-f1, a VSTi audio plugin that generates sounds based on a new physical model of strings.

The goal is not to emulate any existing instrument, but to create a new musical instrument. The model consists of a set of two strings for each of the 88 keys. A virtual hammer strikes the strings. The vibrations are converted to sounds.

The model doesn’t use any samples: everything is computed in real time. This gives the freedom to change any parameter of the model, allowing to tune the instrument in many different ways, and to produce a wide variety of different sounds. For instance, you can change the material the strings are made of from plastic to metal, or adjust the shape and hardness of the hammer along with its position on the strings. All these properties can be modified on a per string basis. Another benefit of the simulation is that there are no discontinuities between the notes, or between different velocities.

Sylfid-f1 is available to purchase as a VST instrument for PC and Mac, priced at $120 USD.