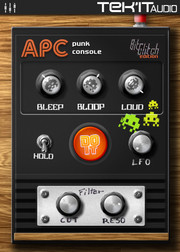 Tek’it Audio has released version 1.1 of APC, a virtual re-creation of a popular DIY circuit the Atari Punk Console.

This update comes with four new user mods like an LFO or a lowpass filter and some rework on the GUI giving it a more realistic feel.