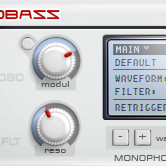 Genobazz 1.2.1 has extended features and some bugs fixed. The most exciting feature is the “Randomize” function, you can move the knobs randomly, but now also the switches and controls of the screen. You can leave the chance create totally random patches.

Genobazz for Windows PC (VST) is available to download as freeware.