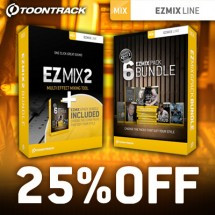 Whether you’ve had your eye on EZmix 2 and have yet to take the plunge, or you’re an existing user wanting to expand your palette of mixing presets, these two October deals from Toontrack offer exceptional value for money!