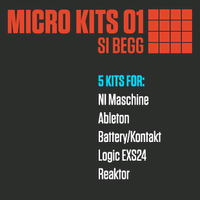 Each MICRO KITS release will feature 5 drum kits by a cutting edge sound designer and will represent a wide variety of electronic flavors. The series debuts with MICRO KITS 01 by SI BEGG.

MICRO KITS 01 by SI BEGG features 5 meticulously crafted drum kits, perfectly suited for use in a wide variety of electronic genres. Brought to you by renowned sound designer and music producer, Simon Begg, the sample pack’s kits are formatted for a wide variety of samplers, providing instant inspiration for new tracks. The raw .wav files are included as well and can be used with nearly any host software. MICRO KITS 01 has been created with with a signature Si Begg sound that is futuristic, yet playful and bound to no specific genre.

Si Begg has a reputation in industry circles as the producer’s producer. A long-established veteran of electronic music, he continues to remain one step ahead, lauded by his peers for his cutting-edge credibility. Most recently charted by Radiohead frontman Thom Yorke, his prolific and diverse career has seen him win plaudits from those in the upper echelons of the music business, among them: Arthur Baker, James Zabiela, Eddy Temple Morris, Mary Anne Hobbs, Modeselektor, Orbital, Sven Vath, DJ Hell, Radio One’s Kissy Sellout and the late great John Peel for whom he recorded three Peel Sessions.

As a recording artist he has appeared on cult labels such as Tresor, Ninjatune, Mute and Skint, whilst his live performances and DJ sets have seen him perform at nightclubs across the globe, including Tokyo’s Liquid Rooms, Paris’ Rex Club, Sydney’s Chinese Laundry and London’s Fabric.

Micro Kits 01 by Si Begg is available to purchase for $9 USD.