Create Digital Music reports that Urs of u-he will be developing the “Tyrell – N6”, a software synthesizer based on Amazona’s Tyrell.

Tyrell is the result of some 10.000 Amazona.de readers who in a number of surveys and articles in various forums shared their thoughts about what a polyphonic, affordable analog synthesizer should look like. About one year later the concept is worked out as a proper “virtual” analog synth. 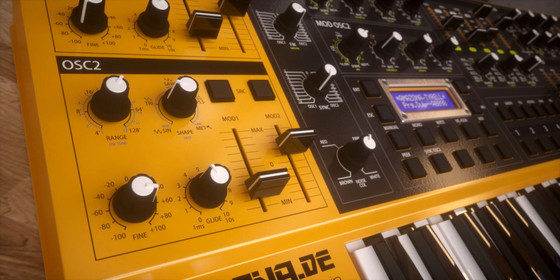 our project TYRELL will become reality. :-) ))
First as a Software Synthesizer, programmed by U-He (from the inventors of ZEBRA 2) and hopefully later as an analog hardware device.

Urs Heckman (see picture) is working on a Synth-project called DIVA. One part of the project is developing a module which is based on the ROLAND Juno 60. Exactly this synth was also the base for the AMAZONA.de Reader-Survey. Now, Urs will bring both ideas together and will create TYRELL – N6 as the first TYRELL Clone.

Since the last letter we have been contacted by three companies from Europe and China. Each of these companies has expressed interest to realize TYRELL.

PS: BTW – the Software Version of U-He will be free of charge for amazona.de readers. We expected a beta-version before Christmas this year!!