u-he has released new revisions of the Hive and Zebra2 synthesizer instruments, which allow you to try out a new wavetable scanning feature in the upcoming Hive version 1.2 release. 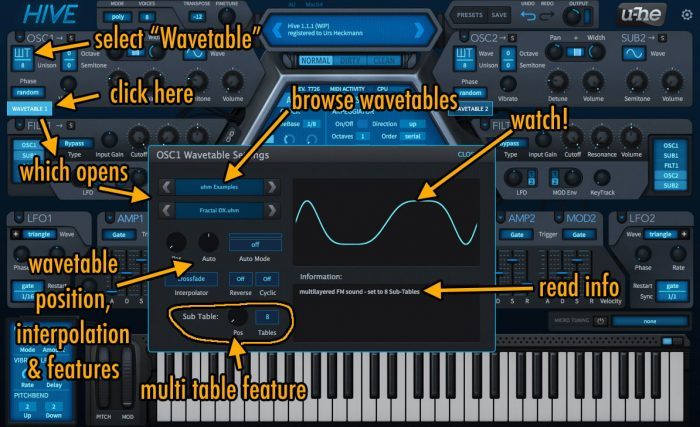 With these new revisions you can use Zebra2 to create two waveforms and export them in a 2-frame wavetable, import this into Hive and use a .uhm script to expand it to 101 frames. This creates a morphing interpolation between the two original waveforms built in Zebra2.

To prepare the world for Hive’s upcoming wavetable scanning feature, we have decided to unleash a preliminary version (UI and all is subject to change).

First off, these versions are not polished and they are not considered production level. Use at your own risk. These Hive and Zebra2 releases are WIP versions solely for the purpose of testing the wavetable feature and starting the process of wavetable generation. The XY feature in particular is not yet final.

The wavetable feature is pretty mature though. The work done there will be valid in the final Hive 1.2 version.

Note: All of this is designed under the premise to incur the least change possible to Hive. For most end users, all that changes is the addition of a gazillion waveforms. We did not want to add elaborate wavetable editors or anything. We leave wavetable generation up to those who want to dive in. They can use the scripting feature as well as Zebra2 or Serum, or even WaveEdit and other tools. We will furthermore not discuss other feature wishes at this stage.