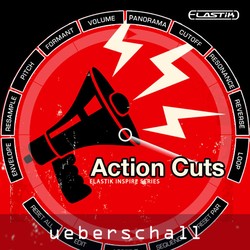 Ueberschall has launched Action Cuts, a new Elastik-Inspire series soundbank with a focus on music for action scenes.

Action Cuts has been specially designed to create music for action-heavy scenes. Experience impulsive Soul- and Funk-beats resembling the popular sound of seventies‘ crime series and action movies and brought back to new life in modern big beat style. Combined with rocking guitar riffs, rolling basslines and funky talkbox-licks, these loops will speed up every dynamic scene dramatically. This makes Action Cuts the ideally solution for movies, TV-series, advertisements and games.
Of course, Action Cuts is also suited for song productions that rely on the power and dynamic of these cinematic tracks. Producers of Big Beat, Breakbeat, Crossover and Dance will find as much inspiration in this library as scoring musicians.

This 1.2 GB-Library does not contain conventional construction kits. Rather, Action Cuts is a pool of ideas consisting of no less than 820 loops to be freely combined. So to speak, this library is a single huge construction kit. And there is no danger that two musicians will produce almost the same track.

The drum loops of this library contain complete beats, breaks, drum-SFX-loops as well as single loops of kicks, hi-hats, snares and cymbals to be freely combined and exchanged. Instrumental phrases include electric- and synthesized basses, electric guitars, synthesizers, effect sounds, vocals and talkbox licks. All loops are sorted in categories while tempo and pitch can be freely adapted using our Elastik player. Track creation is fully in your hands with guaranteed individuality that is even promoted by our Inspire-concept.