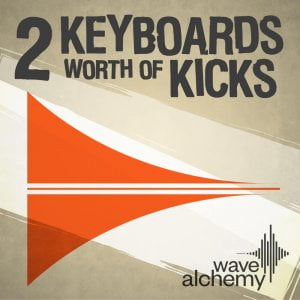 Wave Alchemy has announced the release of 2 Keyboards Worth of Kicks, a kick drum library built from an entirely different focus than most.

Not thousands of sounds, but two keyboard’s worth of characterful, highly usable kicks that easily turn into many more inside your mixes! The sounds are not made to instantly impress, but to be of ultimate usefulness in productions.

Expect 128 core samples presented in three versions: one being the original as described version. Then as variations; a unique processed version, and versions that have been printed to an analogue Ampex tape machine.

The kicks in this pack are built to have an inspiring character, making it easy to get dynamic musical movement instantly, whilst still having plenty of ‘meat’ to cut and shape them effortlessly into your mixes without them either fighting you or falling apart in the process. Hence these kicks turn into many more in practice, allowing you to effortlessly bend them into lots of effective shapes, without losing their inherent knock…

2 Keyboards Worth of Kicks features