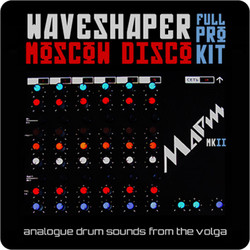 Waveshaper has announced the release of Moscow Disco MkII, an update to the drum sample pack featuring all the sounds from the “pro classic” version, and more than 500 fresh new samples with many variations and an optimum sound quality.

Built like a tank with a funky design, you will be surprised by the raw sound of the ultra-rare Marsh UDS russian drum synth. The kick drum is huge, the snares and hats are sooo analogue, and this unit is also perfect for all kind of depitched toms and retro sci-fi FX.

This WaveShaper kit will bring you back into eighties goodness, but with its thick, blurby, retromodernistic sound, you will also enjoy it on your electro, idm, minimal or space disco tracks.

Waveshaper has also announced that 4 of its critically-accaimed drumsample packs are now also available as Kontakt versions.

When purchasing 12bit drummer, Plasticid MkII, Kr55 or Algo Operator, you now have the choice to get either the “normal” pack with WAV samples, or a bigger pack containing both the WAV files as well as NKI kits for just 1$ more!