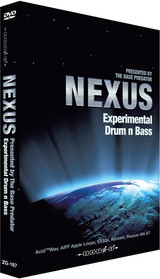 Zero-G has announced the release of Nexus – Experimental Drum n Bass, a sample collection by the Base Predator, featuring almost 2 gigabytes and over 650 samples of cutting edge sounds in stunning 24 bit audio.

Nexus is more than just a simple drum & bass library and can be used in almost any modern music genre including film and television production. Almost every possible mood is presented to the user in this library ranging from fast paced hard hitting drum riffs through to piano atmospheres that convey a spine tingling feeling of emotion.