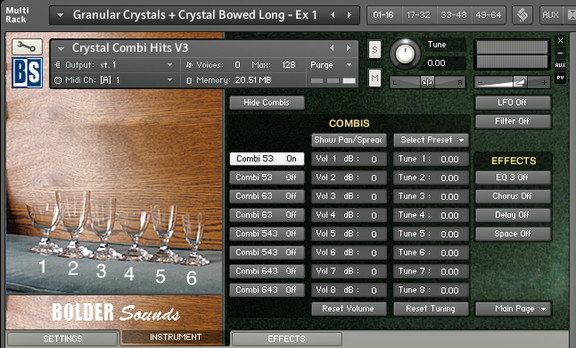 The Crystal Glasses is a project I began in 2007. I worked on it sporadically over 3 years. Bolder Sounds already has a very popular sound set entitled Crystal Glasses and Meditation Bowls. So – why create another? The crystals recorded in that library date back to the mid 1990’s when 16 bit mono samples was the standard format (the Meditation Bowls were sampled at a later date in stereo). Also – the idea of recording these crystal glasses as a group of glasses opened up the door to different sound design opportunities. This newer Crystal library features 24-bit stereo samples, round-robin sampling, numerous articulations and Kontakt scripting galore.

The library is available for the introductory price of $39 USD until November 1st, 2014.