BOSS has announced the availability of the Katana-Air, the world’s first totally wireless guitar amplifier. 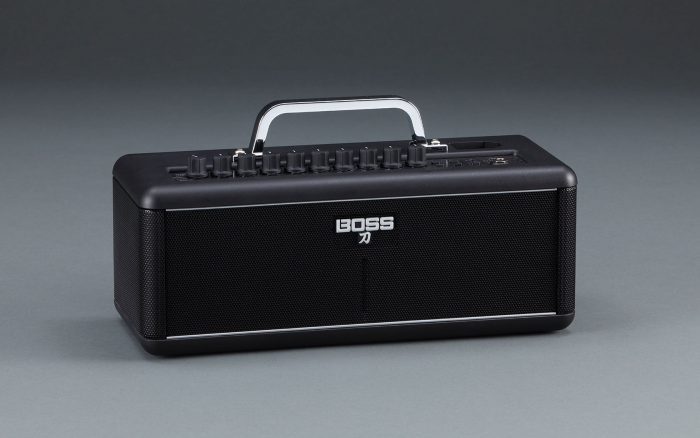 Compact and battery-powered, the Katana-Air features new low-latency wireless guitar technology developed by BOSS and a custom wireless transmitter that plugs into any electric guitar. This gives players the freedom to jam and practice anywhere without fussing with guitar cables or AC connections. It’s also possible to play along with audio streamed via Bluetooth from an iOS or Android smartphone, and remotely edit tones and effects from the dedicated BOSS Tone Studio app.

The Katana-Air is a true stereo amplifier with two custom-tuned speakers and up to 30 watts of total power, offering big, rich sound for both guitar amplification and full-range music reproduction. A convenient docking port in the amp charges the battery in the included wireless transmitter, providing up to 12 hours of continuous playing time per charge.

The Katana-Air is always ready to play. It operates in standby mode to conserve energy when idle, and instantly wakes when it senses motion. In addition, the transmitter automatically establishes the optimum wireless connection when docked, with no user operation required.

The Katana-Air wireless guitar amplifier is now available for $399.99 USD.