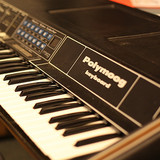 Hollow Sun has released Vox Humana, a free pack of samples from the Moog PolyMoog.

In something of a PolyMoog fest, Joeri Peeters (who provided the PolyMoog Keyboard Strings I&II samples below) now offers his exquisite PolyMoog Keyboard ‘Vox Humana ‘ samples, arguably THE most distinctive and famous sound from this instrument which shot to fame when it was used as the signature sound in Gary Numan’s hit record ‘Cars’, so good they released it three times and STILL gets regular airplay today and STILL sounds as good as it did back in 1979 when it was first released.

Like the Strings I&II below, these come from a lovingly restored PolyMog Keyboard 280e owned by Leo Gelderland from Holland and we are grateful to him for allowing Joeri access to it to sample it in such detail. They are long samples with room to breathe and have been impeccably and seamlessly looped.

The PolyMoog Vox Humana FreePack is available in Akai S5/6000, Kontakt 3 and Alesis Fusion formats from Hollow Sun, and in additional formats from Joeri Peeters.