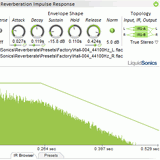 Reverberate seeks to provide a richer and more dynamic sounding reverb from impulse responses by optionally modulating an amalgamation of two, separately controllable true stereo IRs using an LFO. Further modulation is possible using the post-processing effects; an all-pass interpolator chorus provides a fuller sound and an over-sampled analogue prototype paragraphic equaliser is provided with dual LFOs. These features make for a livelier sound than typically associated with some convolution reverbs, at a very competitive price.

Reverberate is available to purchase as an effect plug-in for PC and Mac (VST/AU/RTAS beta), priced at £30 GBP.