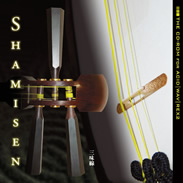 There is a historical “period drama” boom among the younger generation, fueled by the film and music industry. One theory holds that the driving forces behind this boom are director Hayao Miyazaki’s most recent works. These animated features feature historical “old Japan” as their setting, and have been record-setting national hits within Japanese audiences. These successful films have granted us a fresh opportunity to see our country in a different light.

The instrument known as the shamisen can be traced back to the biwaand other similar instruments derived from China; there is arguably no sound to which the Japanese ear is more accustomed. The shakuhachi has little intonation, and the koto, while gorgeous, has no lightness. A mere three strings of the Shamisen spun of silken threads express a vast range of human emotion with rich feeling.