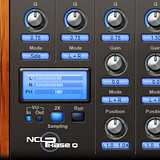 Possible uses include stereo correction and enhancement in both mixing and mastering as well as more traditional and creative EQing tasks where audio quality is of the highest importance.

NCL Phase EQ was developed for the KVR Developer Challenge 2009. It is available as a freeware VST effect plug-in for Windows PC.