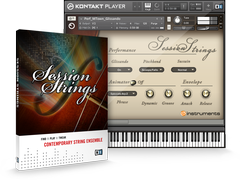 Aimed at producers looking for high-quality ready-to-go string sections for modern productions, SESSION STRINGS produces immediate results without hours of fine tuning and tweaking, yet also boasts an incredible set of expressive features accessible from a highly intuitive interface. The fully production-ready sound is made up of four violins, three violas, two celli and two double basses – played as one perfectly realized ensemble via the free KONTAKT 4 PLAYER or KONTAKT 4, representing outstanding value for money.

Session Strings for Kontakt 4 and Kontakt 4 Player is available to purchase for 99 EUR.