It’s the result of interaction with the Eurorack community since the launch of the Percussa Engine and Synthor System 8 at the Winter NAMM 2017 show in Anaheim, CA. The mSSP is the smaller, lower cost but equally powerful version of the successful Percussa SSP eurorack module which was funded on Kickstarter in September 2017 and which was delivered in June 2018. 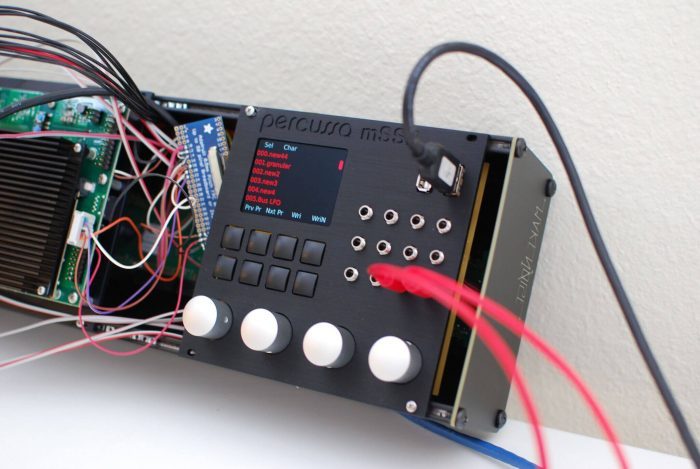 The mSSP comes with the same quad-core ARM cortex A17 processor @ 1.8GHz as the SSP, one of the fastest ARM processors available, and high end AKM audio converters offering 8 in / 4 out @192kHz 32-bit.

The mSSP will be shipped with 50 modular synthesis patches offering polyphonic wavetable, granular, sampling and traditional synthesis techniques, multi-channel audio processing and much more, all in only 26HP of rack space and for only $549.

Backers will be involved in the selection of the patches for the mSSP. Of the 50 patches that will be delivered with the mSSP, half of them will be suggested and voted on by the backers with the other half decided on by Percussa.

The main differences between the mSSP and the SSP are the following:

In terms of connectivity, the mSSP will offer 2 USB host ports supporting MIDI (MPE) controllers and USB flash drives. Storage wise the mSSP comes with 2GB of internal RAM and 4GB of internal flash, which is especially useful for loading large WAV files into patch modules.

The mSSP will run the same DSP software as the SSP, offering more than 25 built-in modules such as wavetable oscillators, granulars, samplers, filters and effects. Patches shipped with the mSSP will use a combination of these modules.

Users will have the flexibility to develop and load VST plugins compiled for Linux/ARM, switch pre-made patches on the fly, change routing of patch signals using toggles, and change, store and recall parameters. Since the mSSP comes with a smaller display than the SSP, the user interface of the software will be redesigned for the mSSP.

In terms of patch, preset and file storage, the user is only limited by the size of the USB flash drive. The mSSP supports loading synthesis patches created on the SSP by Percussa or the SSP community.

The mSSP kickstarter project offers an early bird pledge, a normal production unit pledge, special low serial number pledges, and an mSSP patron pledge for those who want a custom patch with their mSSP.

Save 70% off Barrage cinematic drums library by Hidden Path Audio