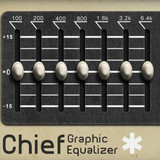 It’s an emulation of the BOSS GE-7 Equalizer. It is the most popular guitar pedal equalizer. But despite of the fact that it is a pedal effect, it can be also used for other purposes.

Since the plugin version does not generate noise, humming or other unwanted sound artefacts small pedal effects usually do, it can be even used for certain mixing or mastering purposes, especially when no surgical precision is needed (For example, when you just want to quickly cut the mids or boost high or low frequencies)

Chief Graphic Equalizer is available to download as a freeware VST effect plug-in for Windows PC.