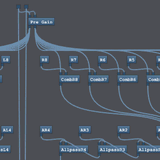 Plogue has released version v0.9705 of Bidule, a modular audio software for Windows and Mac.

The brainchild of Plogue Art et Technologie, Bidule is a cross-platform application that is gaining recognition world-wide as the new standard in modular music software.

Bidule is available to purchase for PC and Mac (standalone/VST/AU), priced at an “early bird” price of $75 USD excl. VAT.