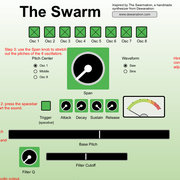 reFuse Software has released version 0.3.1 of The Swarm, a free drone synthesizer inspired by The Swarmatron.

Since the initial release of The Swarm, just five days ago, we’ve seen an extremely positive user response. For an obscure type of synth, not playable by traditional (keyboard-controlled) means, the number of downloads has been surprisingly high. And those download numbers have only come from OS X users… until now!

We are pleased to announce the immediate availability of The Swarm for Windows.

The Swarm is now available as a freeware application for Mac and Windows.