I took a look at MegaDelayMass, a delay effect with a twist.

Think about this: up to 100 separate delay taps that can be either rigidly time synched OR completely randomized. Go from vocoderish resonation to unusual, non-linear, reverby sounds. Control the volume of the head of the delay or the tail! Randomize panning! Control randomized “clumping” through a logarithmic curve. Use it as a non-linear room simulator (especially if you’re a fan of pre-delay). Affect the phase of individual taps. Add a regenerative delay that only plays back ONLY the sound of the taps and can be placed anywhere over 2000 ms with control over its own feedback and phase!

Although MegaDelayMass is perfectly capable of simple tap delay effects, it is obviously made to do some more exciting things.

The interface of MegaDelayMass has 4 sections:

One thing I haven’t mentioned yet is the handy display in the GUI. Although quite small, it is a great way to see what is going on with your taps. Here’s how the manual puts it:

This is a graphical representation of the actual number of taps and their placement over time (positioned from left to right), position in the stereo field (position from top to bottom), with the states of individual tap’s amplitudes (brightness) and phases (color – white is “in phase”, red is “out of phase”). 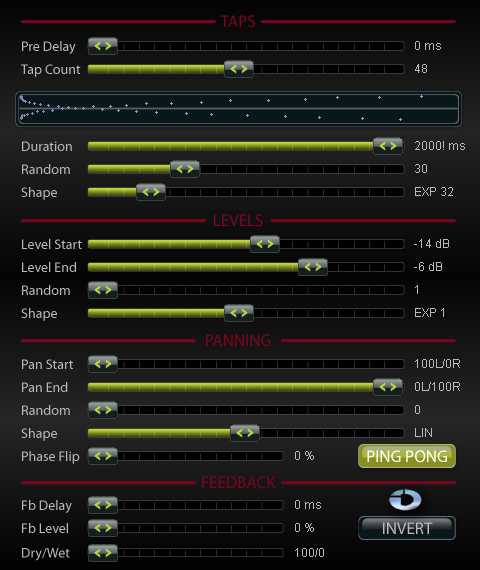 In the example above I set 48 taps lined up at exponential 32, so lots of the taps are in the early part of the delay. They are positioned slightly uneven with a random value of 30. The panning goes from 100% left in the start to 100% right in the end, but since I enabled Ping Pong (visible in the full screenshot, click the image above to see it) the taps alternate left and right.

I made a few demo sounds so you can get an idea of the type of things this effect plug-in is capable of. Every sound clip will first have a dry/unaffected sound, followed by the exact same loop with MegaDelayMass on it.

You can find many more sound examples on the MegaDelayMass product page. Make sure to check the ones where the delay duration is controlled with a keyboard via MAX/MSP.

MegaDelayMass is available as a VST effect plug-in for PC and Mac (AU and RTAS may be supported in the future) for $49 USD. A trial version is available for download from the product page (requires PACE).

MegaDelayMass isn’t the first multi-tap delay effect I have seen, but it certainly is the first with 100 taps. Playing around with its settings on various audio sources I found the plug-in to be very musical. It invites you to find sounds you haven’t heard before.

While it is easy to get lost in experimental effects you can also apply just a little of this unique effect to your audio. The dry/wet slider is there for a reason!

I can recommend MegaDelayMass to those looking for a creative effect, those who like their effects to be capable of some serious FSU. If you don’t know what FSU means, or if you are just looking for a simple (multi) delay effect this one is probably not the right one for you.

In short I found MegaDelayMass to be tons of fun. It gets my creative juices going, mangling sounds almost beyond recognition. I found it equally useful for spicing up sounds by applying the effect with moderation.