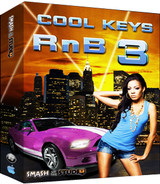 Smash Up The Studio has released Cool Keys RnB 3, a collection of keyboard loops, performed by a top pro keyboard player Steve Burton.

As with all Smash Up The Studio products most loops are complete musical chord progressions on which you can build your track. Whether using the MIDI loops and your own instrument plug ins, or the Wav’s, which were created using a wide range of classic synthesizers and professionally programmed.

Also included are the 5 construction kits you hear in our preview track, all the sounds are included as separate samples, so you can build each track to your own requirements. The drums are purely for demonstration purposes and are not included.

The loops range in tempo between 65 and 130 bpm and have been recorded as 24 bit Wav’s and Apple Loops. The MIDI files are also included for those producers who like to experiment with their own sounds and personalise the loops to their own taste.

All in all, a fantastic resource for both producers and songwriters alike. Whether a novice or a pro this pack will take your tracks to a higher musical level.