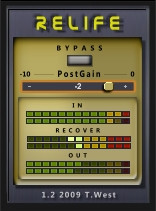 Terry West has released ReLife, a VST effect plug-in that can bring back life to a heavy clipped audiofile, recovering transients and warmth.

Here’s my new plugin that can bring back life to an overcompressed audiofile. Due to the loudness war most songs released today are clipped to the extreme. ReLife can bring back the “valley’s and peaks” to give more air to a song. A very important stage when your song are send for broadcasting. This prevents the radiostation hardware to limit it even more, but without sacrafice your initial rms level!