Funded in just 3 hours, the Kickstarter campaign for the TheoryBoard Thy333 is now nearing one million dollars raised with 9 days to go. Irijule has announced that it is planning to implement some requested features before delivering the music theory MIDI controller in December. 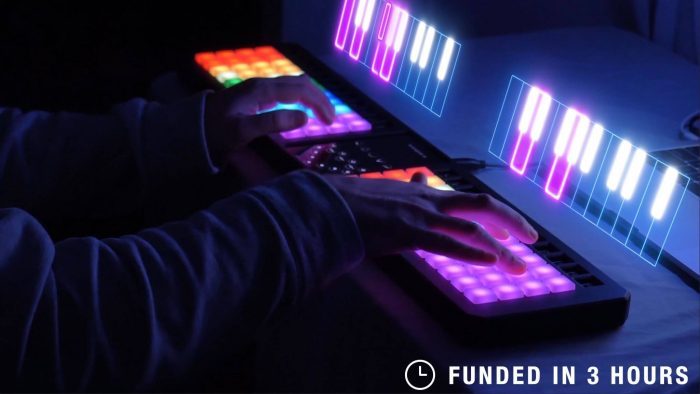 The TheoryBoard Thy333 can help a complete novice jumpstart into music production by cutting out the dreaded music theory learning curve, or help a veteran producer derive new inspiration. It gives you access to over 840 scales and when a scale is loaded the user has access to every possible note and chord within that scale, making it impossible to play a wrong note.

The TheoryBoard Thy333 comes packed with nearly 2 billion different chord combinations and a color-coded system and intuitive layout that lends to a completely new way of perceiving music.

Evan Swanson (Irijule’s CEO and Co-founder) on the success of the current Kickstarter:

“With the success of this campaign we’ll be able to fast track most of the feature requests from our backers. The input from the community is my favorite part about running these campaigns because someone might see a pattern/implementation/feature that is outside of my knowledge base. It allows you to outsource ideas from a vast community of musicians.

Everyone has their own knowledge base and unique perspective when it comes to making music, so it’s really valuable to be able to bounce ideas off of everyone. I try to keep my mind open to any and every idea. It benefits everyone because it helps us create a better product which in turn, makes a happier customer in the end. It’s like a positive feedback loop, I love it.”

Irijule aims to implement the following feature requests before shipping out units in December:

Another perk to blowing past their funding goal is that Irijule can now allow more backers in at the discounted Early Bird price. They plan on keeping this open until the $1,000,000 milestone is reached, so claim your spot before it’s too late.