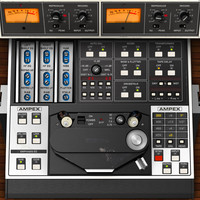 For more than three decades, the two-channel Ampex ATR-102 Tape Recorder has turned music recordings into records. The perfect complement to the workhorse Studer® A800 Multichannel Tape Recorder Plug-In, the officially sanctioned ATR-102 plug-in provides the final, cohesive analog polish and punch for any in-the-box mastering session, without the ongoing maintenance and calibration of a physical tape machine.

Impeccably developed over a nine-month period in the renowned UAD engineering tradition — and incorporating presets from noted ATR-102 users Chuck Ainlay, Richard Dodd, Buddy Miller, and Mike Poole — the ATR-102 Mastering Tape Recorder Plug-In faithfully replicates the unique dynamics, frequency response, and saturation characteristics of the original hardware. Scrutinized and fully authenticated by Ampex Corporation, the sound of the ATR-102 plug-in for UAD-2 is virtually indistinguishable from its analog cousin.

The Ampex ATR-102 Tape Recorder Plug-In is available to purchase in UA’s Online Store for $349 USD.