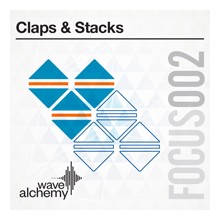 Each and every sound has been built from the ground up by creatively blending multiple electronic and acoustic sound sources which have been further shaped to perfection using an array of high end outboard processers.

Claps & Stacks serves up 562 cutting edge clap and percussive sounds, specifically designed to work ‘straight out of the box’ and mix perfectly with drum tracks in any modern genre.

To add additional character, we have taken all of the processed sounds and cut them to a 12” acetate dubplate. This has been done to take advantage of the physical properties of Acetate which wears out after multiple plays.

All sounds have been re-sampled at 5, 10, 20, 30 and 35 plays with the best sounds (those with the most pleasing crackles and sonic artefacts) being re-edited and included (alongside the processed sounds) in the final library.

The sample library is available to purchase for £11.95 GBP.

Prime Loops launches The Big Drop Sale – up to 50% off